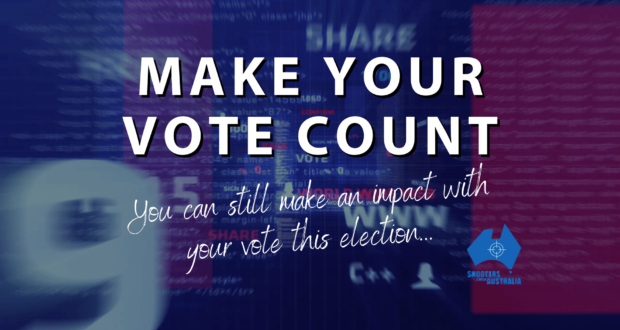 The Western Australia State Election for both Houses of Parliament is on Saturday, March 13 and as our vice-president David Brown explains in this video, if you’re a shooter in WA, you basically have two options:

We strongly believe the best way to put pro-gun, pro-freedom, pro-liberty candidates at the top of your ballot and put the Majors last.

We’ve never seen a situation like the one in WA before, with a Premier who hates shooters certain he will sweep the upper and lower houses, and an Opposition leader who has effectively conceded defeat a fortnight before the election, and a Police Service who hate shooters and go out of their way to make things difficult, recategorising or banning guns on a whim.

Despite the challenges, the 2021 WA election represents a chance for WA shooters to try and get a few independents into parliament to turn the tide of gun-hating in WA.

The only way to save shooting in WA is to get pro-gun, pro-freedom candidates elected to parliament.

It’s a difficult topic – not everyone likes talking politics – but it’s an important discussion to have if there’s ever going to be any changes for WA.
Sit down with your friends, family, shooting mates, talk to them, and encourage them to vote for a pro-freedom, pro-liberty party.

It’s not just about guns, it’s about having a state that doesn’t shut itself off from the rest of the country and about ensuring WA has a representative parliament and not an elected dictatorship.

This election date: Ignore the ‘How To Vote’ cards – it’s your vote, it’s your say, and you decide who you want representing you in parliament.
Make your vote count – and put the Majors last.

2021-03-03
Sandra Hammond
Previous: Are you having a firearms licencing issue?
Next: These new Fit & Proper Guidelines WILL affect your licence.