Home - LATEST UPDATES FROM THE SHOOTERS UNION CAMPAIGNERS - Get Up Exposed! Who are they? 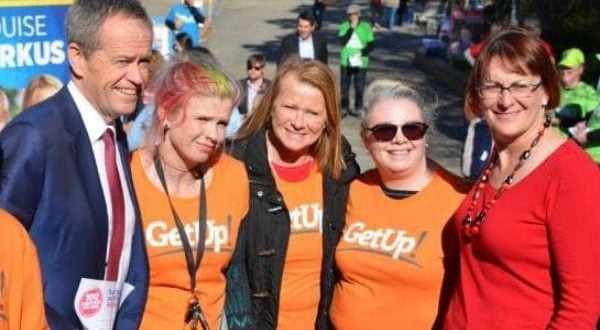 Get Up Exposed! Who are they?

Are they independent, unaligned and grassroots, as they claim?

“The GetUp movement is powered by the values and hopes of everyday people. By combining the power of one million members, movement partners and a central team of expert strategists, we do whatever it takes to make an extraordinary impact.   GetUp members come from every walk of life, coming together around a shared belief in fairness, compassion and courage. It is GetUp members who set our movement’s agenda on issues they care about, in the fields of Environmental Justice, Human Rights, Economic Fairness and Democratic Integrity. Our work is driven by values, not party politics”.  GetUp is, and always has been an independent organisation. We are beholden to no-one, but each other, and our shared values

We suggest that Get-Up! is:

Get-Up! Is a highly successful left-wing political pressure group. Employees (its payroll apparently is $4.6 million per year) are highly talented campaign writers who use the psychology of storytelling to create an emotional imperative in its supporters to act by “chipping in” cash, writing letters, sending emails, attending polling booths, demonstrating etc. Almost without fail, we suggest, that actions are directly or indirectly designed to boost the fortunes of Labor and the Greens and to damage the conservative or right-wing parties. Is this correct? We are on a discovery mission!

This is what we have uncovered so far!

GetUp claims they are independent – but from what and from whom? Let’s examine these claims in more detail.   Senator Eric Abetz claimed as far back as 2010, that GetUp only supported the progressive side of politics.  “Might I say from the outset that GetUp!’s activities would be perfectly legitimate if they just came out and admitted to being a left-wing activist group. The trouble is that GetUp! trades on being “independent” and “non-partisan” when it is anything but.” Abetz said (1)

GetUp was bankrolled with over a million dollars from Billionaire Socialist George Soros, along with a ‘small’ donation of $100,000 from the Australian Workers Union (AWU) when Bill Shorten was President. (2)

In a strange twist of de-ja-vu, the co-founders of Win- Back- Respect, MoveOn and Avaaz in the US, were also the Co-founders and creators of GetUp in Oz. Hardly surprising then, that GetUp dutifully followed their US counterparts’ example.   Over the next 15 years,’ rivers of gold’ flowed into GetUp’s coffers from a group of interconnected overseas organizations, many with links backed by George Soros.  Research shows their campaigns almost exclusively supported progressive-left outcomes. (3)   (More on this later in our next follow-up article)

Who is George Soros – reported to be GetUp’s major donor?

George Soros was born in Budapest in 1930. He survived the Nazi occupation by working for them and went on to study economics in London, successfully damaging the Bank of England by manipulating currencies, and then embarking on a career of huge wealth creation (4)

Today, George Soros is one of the world’s richest men, donating billions to political causes around the world through his many ‘philanthropic’ organizations, including his starship ‘Open Societies Foundation’ (5) . It is reported he has pumped $18 billion over many years, into his mainly socialist causes, all around the world.  (5)

Some of these socialist political causes appear to include ‘open borders across the Western world, climate change solutions often “taking money from poor people in rich countries to give to rich people in poor countries”, a One World Government and Police Force, Renewable Energy to replace all fossil fuels, an Emission Trading Scheme (ETS) , Carbon Tax, Planned Parenthood (abortion), Vegetation Management and food production controls , to name but a few. To some, these causes resonate as bringing fairness and equity to man-kind, saving the planet and promoting worldwide peace, but to others who have lived under a Socialist Regime, they are truly frightening.

Australia’s electoral system has numerous political parties across a broad spectrum that participate in elections under a political process. Parties and candidates must comply with strict regulations to participate. This is important because they are in the business of affecting electoral outcomes.

Then we have GetUp – a political-activist group, that receives money from a socialist billionaire and various other affiliated overseas organizations. GetUp also participates in elections to affect outcomes in significant ways, but GetUp are apparently exempt from any such requirements or restrictions!

The Federal Government has finally recognized the danger of overseas political influence in our political system and government and is seeking to pass legislation that would require more transparency surrounding donations to groups such as GetUp. (more on this in follow up article)

How does GetUp stir people into action?

GetUp appear to be masters in the psychology of storytelling to create an emotional imperative.  Many well-meaning Aussie Mums and Dads will act and ‘chip in money’ to fund GetUp’s voracious appetite for campaigning and electioneering.  They will support ‘genuine and worthy’ campaigns, but many could be unaware these campaigns are predominantly aimed at damaging the conservative side of Australian politics and big corporations.

Cleverly written, with all the components of a good yarn and clever story-telling they offer personal engagement and a feel-good-factor to people who otherwise would not participate in politics. Who wouldn’t get convinced to be part of a campaign that delivered fairness and justice for all?

“Save Medicare, save the reef, stop closing public hospitals and Australian schools” they yell.

But are these just manufactured enemies and confected situations?

But, if their (GetUp’s)  supporters looked at the evidence we have uncovered so far, would they still support GetUp?
Would they support an organization if they were aware their efforts and donations could be undermining Australia’s democracy, and more importantly, assisting to install a progressive-left, Labor, socialist government?

An August 2016 article uncovered hundreds of dumped files exposing the influence of socialist billionaire George Soros, on Western Politics. The Australian arm of the Soros network is GetUp! (6)

Remember the furore over the alleged Russian intervention in the US Election of President Donald Trump?
Would supporters of GetUp, support similar overseas intervention in Australian politics if they were aware?

How is GetUp funded?

“The proposed crackdown on foreign donations would wipe us out” GetUp! moans.

Apparently, significant overseas foreign donations have flowed into GetUp, which could explain their concern over proposed legislation coming before the Senate.

GetUp says they are funded by Aussie Mums and Dads, but their concerns about foreign donations would suggest otherwise.

Our research so far has uncovered donations from Campact in Germany, Avaaz and  The Oak Foundation in the US, and who knows how many other Soros-funded overseas organizations?  (7)

This could call into question their claims they are funded primarily by Australian Mums and Dads!

Some interesting players in the field of overseas foreign interference through the ‘GetUp-Gateway’ have so far been discovered.   A combination of national and international players appears to be linked to the organization, challenging their claims of ‘independence’!

Missing from this list are political parties, industries and corporations from the conservative side of politics.

·         Avaaz – based in the US. Global climate change and human rights activism

·         Open Societies Foundation – based in the US. Racial and transgender activism

Is GetUp independent and without foreign influence?

We leave you to draw your own conclusions.

Perhaps your money and support would be better placed elsewhere?

In our next report, we will examine in more detail, the real sources of funding for GetUp!

Until then, please share this article and  memes across Social Media.

Article written by Rite-on: Action for Oz. Read the full article here: https://www.riteon.org.au/getup-exposed-who-are-they Rite-On! You, as supporters of Rite-ON! will influence political outcomes through debate, issue-based campaigns, petitions, lobbying and activism. There is something that everyone can do, to make positive changes. The Unions, Greens, Labor, and GetUp have built a well-funded and formidable movement of activists, all working and conspiring to win government. Their combined efforts are eroding our way of life and freedoms. We believe to achieve political success and balance, we need to apply the same fundamental ‘coordinated activism’ to promote our values, principles and policies! Our grassroots group of political activists work to support democracy, western values, freedoms and equal opportunity – not political parties. More at: https://www.riteon.org.au/about/
2018-11-06
sandra
Previous: GetUp’s charity status deleted
Next: Waves Ep 198. Gun Politics in Australia