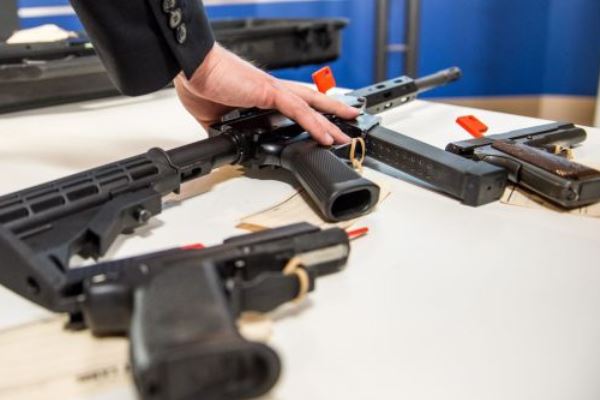 A cache of illegal guns has been seized by state, federal and US authorities as part of an investigation to tackle an international weapons operation.

Investigations began after an armed robbery at a western suburbs McDonald’s 15 months ago, where a Thureon AR-15 assault rifle was used.

That weapon was then “backtracked” by police, which helped prevent a large consignment of weapons being imported to Australia.

In June, US officials seized six fully automatic assault rifles and 96 semi-automatic handgun frames, which police allege were due to be imported to Australia.

On Wednesday, 12 search warrants were executed in Victoria and NSW, with more than 300 firearms and gun parts seized, including from a registered gun dealer.

Two men, one from Whittington in Geelong, and one from Koraleigh, a small town just over the Murray River in NSW, were charged with firearms offences.

A 44-year- old Whittington man was charged with one count of possess an unregistered Category E Longarm under state legislation.

The work was the result of transnational investigation including the Federal Police’s anti-gang squad and Victoria Police, as well as the US bureau of alcohol, tobacco and firearms and homeland security investigations.

The weapons that were stopped from entering Australia were set to be smuggled in the bottom of a legitimate container of goods from the US to Melbourne.

Police Minister Lisa Neville said Victoria had unfortunately seen an increase in shootings, and welcomed the action of police.

“This is about keeping our community safe,” Ms Neville said.