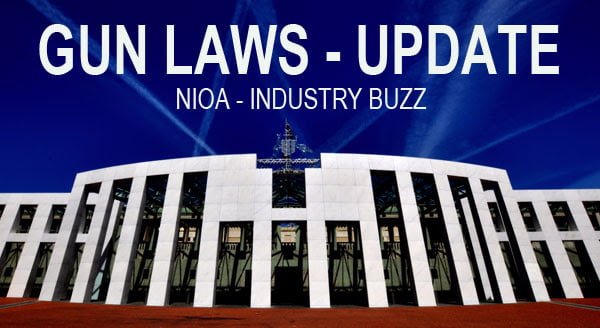 Last week was a big week in Federal Parliament for the future of Australia’s gun laws. Industry have now been invited into the process to review the 1996 National Firearms Agreement, based on the recommendations of the Martin Place Siege Review. The Martin Place Siege Review calls on the Federal Government and all States and Territories to come to the table to work out how to simplify the regulation of the licensed firearms market and redeploy police resources to focus on illicit firearms.

In a perverse twist, there are a group of politicians and bureaucrats hell bent on opposing the reviews recommendation by proposing more not less restrictions on licensed firearms owners and ultimately starving front line police of the resources they need.

As parliament sits again this week, we have plenty of politicians to thank for their incredible efforts supporting the rights of licensed firearms owners, and we have a few politicians that need to be reminded that we are not going to sit quietly and watch them get a few cheap headlines at our expense.

Could you please take the time to email your thanks to the following members for their efforts in supporting us:

Please note: Members of Shooters Union can use our Political Lobbying Tool to contact Queensland State & Federal Politicians. Please click here: Send Your Views NOW! to use this service

To the Coalition members working tirelessly in the background to ensure licensed firearms owners, user groups and industry get a seat at the table and get their views heard:

To the MP’s that moved a motion of disallowance for the regulation to prohibit the import of the 7 shot Adler shotgun:

To the Minister for Justice who has committed to personally chair monthly consultation with the recently formed Industry Reference Group comprising of Firearms Industry and user organisations:

And to our State members of Parliament that have been working hard behind the scenes with State Governments around the country:

It was also revealed last week that the suspension of the import of the Adler 7 Shot Shotgun was instigated when every single State Police Minister personally requested that Minister Keenan suspend the importation of the firearm. None of the Ministers had sought any information about the firearm from industry, none of them had seen the gun and it has become apparent that their decision was based on the misguided belief that the firearm had some new technology that allowed the lever to operate faster than traditional lever action firearms. This has since been demonstrated to be untrue and exposed as a myth being peddled by the extremist group Gun Control Australia and the Greens.

Please let each Police Minister and their respective Premier know what you think about their personal request to suspend the import of Adler shotguns for licensed firearm owners:

This post was reproduced with the permission of Rob Nioa. Originally published on Monday the 17th of August on  https://www.nioa.com.au/news/latest-news/view/45/gun-laws-update/latest-news
gun law update politicians 2015-08-18
sandra