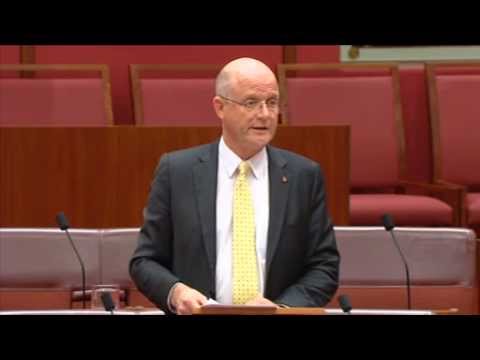 5 min read
Watch LaterRemove Cinema Mode
FacebookTwitter
Watch Senator David Leyonhjelm's speech to Parliament regarding the inquiry into illicit firearms, the Adler lever action shotgun ban, and the other restrictions being placed on law abiding firearm owners. Also available to read is the full speech transcript. Law abiding Firearm owners are not happy. They are sick of being treated as criminals in waiting. They are not happy the government is proposing to impose yet more constraints on law-abiding sporting shooters.

I participated in the Senate inquiry into illicit firearms and made a significant contribution to the majority report. I am also one of Australia’s 800,000 licensed firearm owners. I lead the Liberal Democrats, the only party in this place that without exception stands up for shooters. I am here to say, as plainly as I know how, that licensed firearms owners are not happy.

We are not happy the government is proposing to impose yet more constraints on law-abiding sporting shooters.

We are not happy this is being painted as an issue of national security.

We are not happy that lever action firearms, which have been in use in Australia for well over a hundred years, are now being described as ‘rapid fire firearms’.

We are not happy the federal government has placed a ban on imports of lever action shotguns with a capacity of more than five rounds — commonly called the Adler ban — while it reviews the National Firearms Agreement.

We are not happy that unelected bureaucrats in the Firearms and Weapons Policy Working Group, under the leadership of its chair Catherine Smith, have been agitating for more restrictions on legal gun ownership since 2005.

Dreaming up means of prohibition by stealth.

And we are not happy Justice Minister Michael Keenan has uncritically accepted the wish-list of state and federal police departments without even consulting with firearm groups until very recently.

Last week I managed to blackmail the government into adding a 12 month sunset clause to its Adler ban. This ban was originally introduced as a permanent ban, despite the statement by the Prime Minister that it was temporary.

I’m not pleased that my blackmail was even necessary.

I also blackmailed the government into reopening regular consultations with a long list of representative firearms groups, most of whom had heard nothing from Minister Keenan despite his claim that he had been consulting them.

Again, I am not pleased blackmail was necessary.

I am not pleased that I was the only parliamentarian willing and able to extract these commitments. When it comes to sticking up for shooters, the Nationals talk a lot but are short on action.

Above all, I am not pleased that neither the sunset clause nor the consultation will deter the government from attempting to further restrict the liberties of law abiding firearm owners, all part of drumming up votes on the grounds of proving how tough it is on terrorism.

The Coalition government is struggling in the polls, with little sign of recovery. The only issue on which it seems to make headway is national security.

So we continue to be bombarded with thundering rhetoric about the terrorist threat, demands that we accept ever-increasing powers for shadowy ‘intelligence’ organisations. And before long, we got a manufactured moral panic about guns.

How insulting to link Australia’s 800,000 licensed firearms owners to terrorism.

I can hear it now. The government will refer to the lone gunman in Tunisia who shot all those tourists on a beach, for which Islamic State has claimed responsibility. They will say, just imagine if a lone terrorist with an Adler shotgun were to turn up on Bondi Beach. To prevent Adler shotguns falling into the hands of terrorists, we need to stop licensed firearm owners from obtaining them.

The government will claim this treatment of gun owners is called for by the inquiry into the Martin Place siege. But this siege involved an offender with no licence, using an illegal firearm that was illegally obtained with no record of having entered the country. It seems neither the Prime Minister nor the Justice Minister have bothered to read the Martin Place siege report, either. The report actually only calls for two key things of relevance to guns. First, a reduction in the regulation of the licensed firearms market so that scarce police resources can be re-focused to frontline enforcement activities aimed at the illicit firearms market.

And second, a consideration of new technologies to facilitate better administration of firearms throughout the nation, something as simple as sharing firearms transaction data between jurisdictions. The Martin Place siege report contains no call for any further restrictions on lawful firearms ownership, or for changes to how firearms are categorised.

It also seems the Prime Minister and Justice Minister have not read the Senate inquiry report into illicit firearms. That inquiry heard from police that the firearm of choice for criminals is pistols. Rifles and shotguns are rarely used by criminals. And they are virtually never used for criminal purposes by licensed firearm owners.

Nonetheless, it appears that Catherine Smith from the Attorney General’s Department is seeking legal advice on whether gradual prohibition via reclassification will allow the government to avoid having to compensate firearm owners whose property is rendered illegal and must be surrendered.

This is an outrage.

Why do the bureaucrats who work so hard to convince Ministers to restrict legal gun ownership, have such a striking inability to develop strategies for effectively addressing illicit use of firearms by criminals?

There is significant international evidence about what works to disrupt illicit firearms use, and many practical strategies that could be implemented in Australia. Good, responsible policy making would reflect this.

Yet we have never seen anything to this effect. The bureaucrats advising Keenan on firearms are out of their depth, incompetent, or so wedded to an anti-gun agenda that they care little about what will genuinely improve community safety.

Linking plans to further restrict legal firearms ownership to terrorism is something even the Greens reject as outlandish.

The Government is intent on whipping people into such a state of fear about terrorism that bad decisions – which ultimately have nothing to do with terrorism and everything to do with poor opinion polling – can slip by unchallenged.

We are sick of being treated as criminals in waiting.

We are sick of being the scapegoats for poor policy, lazy policing, and the kind of stuff ups that allowed Man Monis back on the street. And be in no doubt, we will express our disgust at the ballot box.