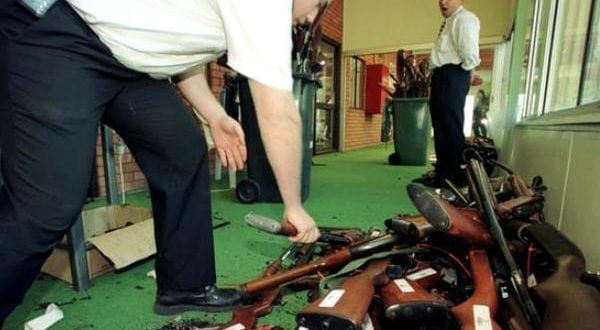 The Tasmanian Liberal government has quietly promised shooters it plans changes to soften the state’s gun laws that would put it at odds with an updated National Firearms Agreement released last year.

The commitments, made in a letter to a firearms consultation group on 9 February but not posted on the party’s website, include extending the limit on gun licence duration from five to 10 years and abolishing mandatory weapon removal for minor breaches of firearm storage laws.

In the letter, police minister, Rene Hidding, said the government would also consider introducing a new firearms category covering all banned guns – to be known as Category E – that would allow “certain specialists” to use them.

Some farmers would be allowed to use silencers on guns used to protect their crops, and the state would ask the national Council of Police Ministers to consider expanding access to Category C firearms to allow a greater range of sporting shooters to use pump-action and rapid-fire shotguns.

Shooting and farming groups said the changes were modest and common sense. Gun control advocates said they were reckless and astonishing, particularly given how strongly the Liberal party had responded after 35 people were killed in the 1996 Port Arthur massacre.

Roland Browne, the Hobart-based vice-chairman of Gun Control Australia, said the planned changes were in clear breach of the national firearms agreement endorsed by the Council of Australian Governments (COAG) in February last year.

The agreement says a firearms licence must be issued for no more than five years, and that the states agreed failing to properly store firearms was an offence that would lead to the cancellation of the licence and confiscation of all firearms.

“The Liberal party has been deceptive,” Browne said.

“Their proposal to walk away from parts of the (agreement) is appalling. They have been caught out trying to pander to an industry group.”

The letter was posted by the government on Friday. In a written statement, Hidding said it was a strong supporter of Australia’s national gun laws, and nothing in its policy would put them at risk.

“I want to be clear, we won’t do anything which is inconsistent with the National Firearms Agreement,” he wrote.

“This policy is aimed at helping agricultural producers, particularly farmers, to protect crops from browsing animals and other pests. Farmers often suffer up to 30% crop losses.”

Premier Will Hodgman told ABC Radio that the policy was about finding an appropriate balance, and Hidding had advised him the policy was not in contravention of the national firearms agreement.

“The intent here is to support our farmers, to allow them to do their job, and to do nothing, I’m told, that is inconsistent with the national firearms agreement or indeed to relax laws that would pose a risk to our society,” he said.

Asked why the policy had not been posted on the party’s website, Hodgman said the government had released more than 170 policies, and that some were of particular interest to certain groups and had been released directly to them.

Labor leader Rebecca White said the government’s plan was reckless and dishonest. She said the ALP’s firearms policy agreed that infringement notices should replace summons notices for minor breaches of firearm storage regulations, but rejected the government’s other proposed changes.

“If the Liberals wanted to change these laws they should have treated Tasmanians with respect and been upfront with them. Instead, they tried to quietly appease the pro-guns lobby,” she said.

Tasmanian Farmers and Graziers Association chief executive Peter Skillern said the proposed changes had been discussed by the firearms consultation group for two years and the government had supported most of them.

He said they included elements that would simply bring Tasmania into line with other states. Suggestions that they were watering down gun laws was a “gross exaggeration”.

“Firearms are a tool of trade in the agricultural sector and these suggested changes are a recognition of that,” he said.

“There is nothing here to say that if you do not store your firearms properly that penalties do not apply. There is nothing in these proposals that would in any shape or form diminish community safety.”

Greens candidate for the mostly rural seat of Lyons, Fraser Brindley, said the plan would lead to more semi-automatic weapons in the community and the introduction of silencers, putting Tasmanians at risk. “If Rene Hidding and the Liberals are so proud of this dangerous policy, why hide it?”

Browne said he had not been aware the state had a firearms consultation group before the letter surfaced. He said the group was not mentioned in the state’s gun laws.

He said the promise to water down the laws was astonishing given the government tightened gun laws just two months earlier, requiring greater security over how firearms were stored, including all owners with 10 or more guns to install an electronic alarm.

Independent polling released on Tuesday suggested the Liberals were best placed to win Saturday’s election, with 46% support ahead of Labor on 34% and the Greens on 12%.

Article written by Adam Morton for The Guardian. Read the original article here. https://www.theguardian.com/australia-news/2018/mar/02/tasmanian-liberal-government-promises-to-soften-gun-laws
2018-03-05
sandra
Previous: Do we feel lucky, George? No, but we feel plastic outrage
Next: Gun Control Australia’s untruths