Home - LATEST UPDATES FROM THE SHOOTERS UNION CAMPAIGNERS - Do we feel lucky, George? No, but we feel plastic outrage 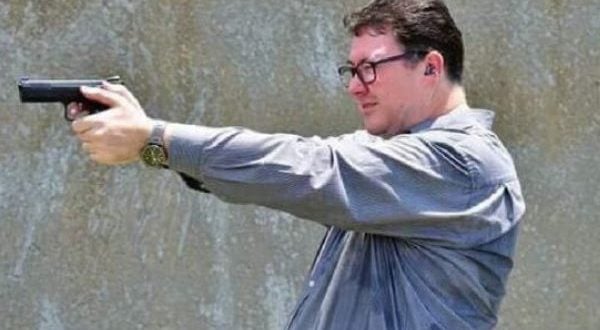 Do we feel lucky, George? No, but we feel plastic outrage

Yesterday we lost our minds when George Christensen uploaded a questionable image to Facebook. While it was a silly thing to do, our reaction didn’t fit.

You have to hand it to “colourful” Queensland MPs. They have a remarkable knack for self-promotion by manipulating the Twitterati into manufactured outrage, as the outcry over George Christensen’s gun-toting Facebook photos proves.

Christensen has been accused, firstly, of inciting violence towards anti-mining protesters. Despite the political dimensions of this accusation, it should still be considered seriously. Regardless of people’s opinions about a certain classic Clint Eastwood line and Christensen’s taste in using it, a rather unoriginally-captioned photo of him with a gun does not necessarily equate to encouraging violence. Legally, “inciting violence” essentially rests on whether a person has urged others to commit a crime with the intent that they should do so. At face value, it seems a stretch to make out that George Christensen has done this.

Nor should we assume he “gives licence” to violence. Even if the imagery is construed as “violent”, relationships between what people see and how that may affect their own behaviours are extremely complex. These questions have been studied for years in relation to violent movies and video games, with the answers varying substantially depending on the group being studied, the intensity of exposure, and a wide range of other situational and personal characteristics.

Viewed rationally, the situation boils down to transparent posturing. A Nationals MP baits greenies to boost his anti-political-correctness credentials, a political aspirant protester recycles a tried and true tactic to generate attention and sympathy for his cause, the Greens hijack the victim card to score free publicity, and assorted pundits piggyback off the whole thing.

This begs the question: why has slow-news-day fodder escalated into hysteria? To understand this, we need to look at the second thing Christensen is accused of. Apparently, he has committed a social transgression: acting insensitively by posting photos of himself holding firearms, in the wake of the latest school shooting in the US. Cue po-faced tut-tutting.

George Christensen is not the first to run afoul of this censorious attitude. It has become standard.

Yes, this in part reflects the all too common occurrence of firearm violence in the US. But the clichéd script also reveals much about Australia’s reactive political discourse and the lazy journalism that sustains it.

Rather than intelligent, proportional and considered responses that reflect individual circumstances, Australians instantly link anything to do with guns here with acts of horrific violence in a completely different country. This is a very specific reaction. We only do it with guns and the US.

It is true that we have some things in common with the US when it comes to firearms. Most firearm-related deaths in both countries are suicides, mainly by older white males. Homicides committed using a firearm tend to occur between younger men who know each other, often come from socially disadvantaged and/or minority backgrounds, and typically have a range of risk factors for both perpetrating, and being a victim of, violence – such as involvement with other criminal activities. Along with many other developed nations, both countries have experienced long-term declines in firearm homicides over the past few decades. After this, the resemblance ends.

So whenever guns come up, why do Australian commentators refer instantly to mass shootings in the US, regardless of context, relevance, or logic? Most likely, we do it simply because we have been conditioned that this is how we should react. Just as Pavlov’s dog eventually salivated at the sound of a ringing bell, we now see a photo of a gun and obediently recite “US gun laws bad. Australian gun laws good.”

This may seem harmless enough, but our determination to cling to these trite scripts and conditioned responses, in fact, reveals a longstanding cultural insecurity. We are utterly desperate to see ourselves as international leaders rather than a bunch of convicts whose opinions are of little interest to the wider world. Grasping at anything we think makes us better or more virtuous than a superpower helps bolster our own sense of importance.

Yet even though politicians like to insist our firearm laws are the “envy of the world,” the reality is that no other country has seen a need to follow our approach despite having more than two decades to do so. Hardly a glowing endorsement.

We might be able to blame the NRA for the US situation, but this does not explain why nobody else is in a hurry to copy us. Instead, a number of countries have turned their efforts to developing and implementing a broad-reaching range of evidence-based measures to reduce violence and address its underlying contributors. Maybe they know something that we cannot hear over the ringing bell.

Seen in this light, our elected representatives’ rote recitals about US mass shootings start to look like nothing more than a platform for their own desire to achieve relevance on the international stage. And at a time when traditional political brands are struggling to recapture increasingly fragmented voting blocs whose identities are based not on what they stand for but by who they rally against as their “enemies”, it also helps to have a “go-to” villain up your sleeve to disguise your lack of real ideas.

So by all means, let us criticise George Christensen for poor taste or insensitivity or just plain stupidity. Let us call out behaviours that legitimately encourage violence. But let us do it with critical thought and reflection, rather than behaving like salivating dogs.