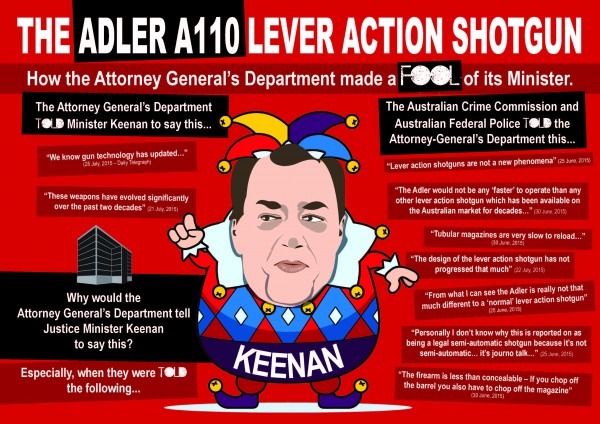 A Lot Has Happened in the Last Two Weeks!

The graphic above outlines what the AG’s department said about the Adler, despite what they were told by the ACC and the AFP.

Why did they say that?

And yet they still want to ban the 7 shot Adler at the COAG meeting next month (and probably a lot more we don’t yet know about!)

Write to your local Queensland and Federal Senators and ask them why!

Despite our best efforts, and the efforts of others including the KAP MP’s, the Queensland Government has steadfastly refused to reinstate the Firearms Advisory Committee, or to consult with firearms groups who will be directly affected by this secret review of the Weapons Act and Regulations.

Some of the activity Shooters Union has been involved in behind the scenes:

But we still need your help.

Please – email your local Qld MP, and your Local federal MP’s and Senators, and tell them (politely) that you insist on being consulted prior to any changes being made ot the Qld Weapons Act and Regulations, and also the National Firearms Agreement

Please write to them now – time is short. The COAG meeting happens early next month!