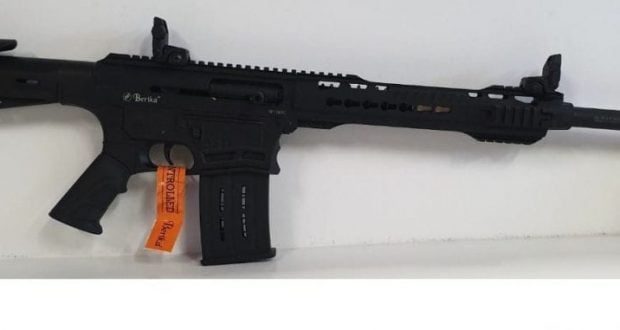 Did no-one at Customs open the shipment – a shipment accompanied by a shipping manifest and B709A import paperwork clearly and explicitly declaring the contents to be firearms – when the Berika shotguns were imported and say “Hmmm, firearms? Better check this out just to make
sure everything is in order”?

We at Shooters Union HQ are starting to wonder if anyone if Australian Border Force actually knows much about firearms, especially given the most recent debacle that’s come to light involving a straight-pull shotgun.
Australian Border Force are understood have sent out letters to gun dealers and some registered owners of the Berika SP-12 ‘Black Ops’ straight-pull 12ga shotgun, informing them Customs have declared the shotgun considered Category A in Queensland) as a “Prohibited Import” because they allegedly resemble an M-16, and invited owners to voluntarily surrender the firearms with compensation to be determined later. You can insert your own skeptical face emoji here.

If not, why the hell not? What are our tax dollars paying for?

And if so, why didn’t someone say “These look a bit questionable category-wise, better check with someone further up the command before releasing these to the wholesaler” if there was any question of the shotguns not being Category A?

No, apparently the best course of action was to send the shotguns merrily on their way – where they were then legally purchased by law-abiding firearms users who had obtained a Permit To Acquire from their state firearms registry – and then decide several months later that mistakes
had been made and to retroactively ban the gun.

This isn’t the first time Customs have pulled this stunt either, with the Riverman OAF .223 rifle – a straight pull design with some design similarities to the Armalite Rifle Model 15 – falling afoul of import restrictions after they’d been imported and sold last year.

It’s worth noting that because the decision to ban these guns from import has been made at Commonwealth level, it overrides anything the individual states might have to say on the matter – thus, even though Queensland might consider the shotgun Category A, as far as the Federal Government is concerned it’s Category D or R because of the appearance clause in the import laws and therefore verboten.

It should go without saying that we hate appearance laws and want them gone – they serve no legitimate purpose, they have no public safety benefit, all they do is cause headaches for law- abiding firearms users.

How a gun looks has no bearing on how it functions, and given no-one except licensed shooters is going to see one at the range or out hunting anyway, they’re doubly pointless and unwanted laws.

It’s time they were scrapped and we’re going to need your help to make that happen – so stay tuned.

Appearance laws are bad enough but you can’t decide something passes those laws then arbitrarily change your mind months later on a whim.

We will be writing to Border Control Minister Peter Dutton demanding an explanation on how this has happened once again, and we encourage you to do so as well.

In the meantime, until you are officially advised by your state’s firearms authority or an appropriate Commonwealth Government agency that these particular guns have been officially been reclassified or banned, we suggest you do not surrender your Berika SP-12 ‘Black Ops’ shotgun voluntarily, and instead seek qualified legal advice.

Stay in touch with Shooters Union on Facebook or Twitter and keep up to date at ShootersUnion.com.au

2019-07-17
sandra
Previous: Channel 9 have a strange definition of accurate and impartial
Next: Letter from SU to Peter Dutton: RE Berika Black Ops Shotgun Ban