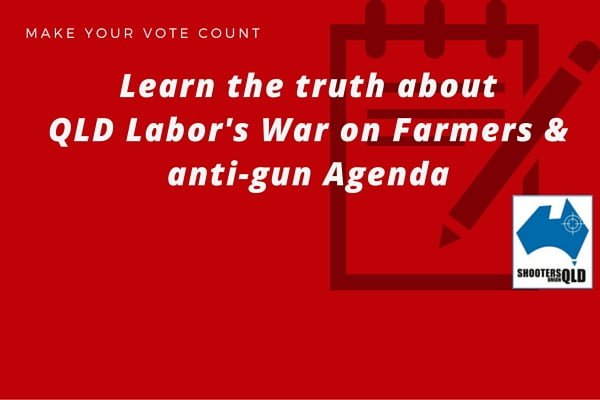 Forget a “Fair Go” –  in a seeming total lack of good economic sense the current Queensland Government seems hell bent on attacking and damaging anything agricultural and regional in our state. Despite the fact that regional Queensland generates considerable income and is the primary caretaker of our natural environment.

First our state government introduces a new vegetation management act which will effectively make all Queensland landowners guilty until proven innocent in areas of tree management.  Key agricultural group Agforce estimates the new legislation could potentially cost our state hundreds of millions of dollars over time.

Closer to home for Shooters Union Queensland is the fact that over the past 18 months we have seen a marked rise in rural member complaints relating to firearms licencing issues.

The current legislation allows for the occupational use of firearms by primary producers. The increase in feral animal populations and damage being done to our environment by feral pests makes it impossible for primary producers to protect their livelihood without the sensible use of a firearm.

It is estimated feral animals cause over $720 million per year in damages Australia wide and yet the very people working to minimize this damage are being harassed and discouraged by the very governments which should be encouraging and supporting them.

Shooters Union supports our friends in agriculture who use firearms every day. We encourage our members to show their support whenever possible as well.

We would like to sincerely thank Rob Katter and the entire Katter Australia Party for their support of agriculture and firearm owners.

CLICK HERE to listen to what our current Police Minister (and former Primary Production Minister) Bill Byrne really thinks about farmers and firearms.