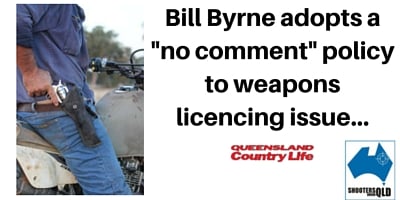 After recent comments in state Parliament painting primary produces as rednecks – “the lone cowboy with the pistol strapped to the hip” – Police Minister Bill Byrne has gone very quiet.

As reported in a story broken by Queensland Country Life here, Mr Byrne told Parliament the “idea of the lone cowboy, with the pistol strapped to the hip as an effective weapon in an agricultural application, simply doesn’t cut it with me”.

It was a remark that has sparked outrage amongst the state’s grazing and farming fraternities, as documented in our article on the subject last week.

Mr Byrne further claimed he had had “genuine conversations with leaders of the agricultural community” on the issue, but this has been refuted by AgForce and raised a storm of questions from the general public.

Despite repeated requests by Queensland Country Life to speak with Mr Byrne to clarify his comments, he has declined to speak with us.

Chief amongst questions raised is that Mr Byrne has misled Parliament by giving the impression he had the ear of AgForce on such a sensitive issue.

Commentators on the Queensland Country Life Facebook page ask if this is an act of contempt.

AgForce president Grant Maudsley has denied having any prior meaningful conversation with the Minister, telling Queensland Country Life here that “Mr Byrne should come out and consult with the ‘cowboys’ he talks about,” stating that the “humane death of an animal is just as valid a purpose as recreational use, if not more so.”

The anomaly of pistol ownership being sanctioned for sport and forbidden for practical use was one of the inconsistencies that left Mr Maudsley speechless.

Mount Isa MP Rob Katter, whose questioning in Parliament resulted in Mr Byrne’s inflammatory comments, has said they’ve resulted in a perception that primary producers claims won’t be given a fair hearing at any future forum discussion.

Mr Byrne said at the time that “the Queensland Police Service and I have serious reservations about the voracity of the claim and the argument presented,”, which Mr Katter said undermined any sense of impartiality for the new weapons forum, before it had even started.

“The minister clearly does not appreciate the reasons for pistol use or have any concern for landowners on isolated rural properties,” Mr Katter said. “To simply deny licenses because of personal beliefs is shocking, and highly irresponsible.”

On the subject of the new weapons consultation forum announced by Mr Byrne, he has only stated that it will be in place by the end of June, not how its representatives will be chosen nor what its terms of reference will be.