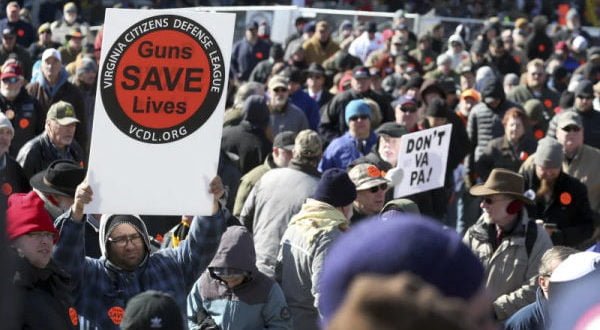 Why the Virginia Demonstrations matter to Shooters in Australia

Media images of well over 20,000 protestors, many of them lawfully openly carrying firearms, on the steps of legislative assembly in the US state of Virginia have been getting extensive coverage online – and with good reason.

The protest was held on January 20th, a day traditionally used for protesting proposed legislative matters in the state as it is a public holiday – Martin Luther King Day – and generated a massive turnout from law-abiding citizens concerned their rights were being ignored to suit a political
agenda.

The state’s Governor is trying to pass laws which would, among other things, ban the sale of military-style semi-automatic centrefire rifles, restrict handgun sales to an individual to one per month, and enact “red flag” laws allowing the police to seize firearms from individuals who have
been reported as being a danger to themselves.

Red flag laws are a controversial subject amongst Second Amendment supporters in the US, with many feeling the laws are far too easy to be abused – the details of who can “red flag” a gun owner vary from state to state.

The rally had been organised by a pro-gun organisation and while firearms were prohibited on the grounds of the state’s legislative assembly building, they were permitted elsewhere in the city of Richmond – which law-abiding citizens of the state took full advantage of, with many of them openly bringing rifles, shotguns and handguns to the rally in exercise of their legal rights.

Inconveniently for the anti-gun brigade, who were clearly hoping the whole thing would kick off and shots would be fired, the rally was a completely peaceful affair with minimal police presence – and not only that, but once it had finished, several pro-gun group members stayed behind to clean up the rubbish from the event.

That, friends, is how you peacefully protest for firearms rights, and it’s a lesson we would do well to learn in Australia too.

One of the reasons the rally was so important was summed up by Reddit user Glothr, who said: “Not only was it peaceful, it was diverse. They [the media and antis] wanted SO BADLY for this to be a bunch of old racist white dudes so they could perpetuate their white nationalist narrative. Instead, they were greeted by people of all races and backgrounds who united peacefully around the cause of defending liberty. That’s what we’re about and that’s what they demonstrated to the country today. This was exactly the kind of win we needed.”

Indeed, there was only one arrest on the day – a 21 year old woman arrested for refusing to remove a face covering when directed to do so by police, despite being warned twice she faced arrest for not doing so.

Leftist attempts to deride pro-gun owners as racist nutters playing soldier have been utterly destroyed by the peaceful, organised, and incident-free way the rally was conducted, and it has provided one of the most powerful proofs yet that gun owners are, first and foremost, law- abiding citizens.

So why is a pro-gun rally in the US relevant to Australia? Because it proves the right and the left can get along when the stakes are high. The issue in this case isn’t firearms, it’s the government being seen to ride roughshod over citizen’s rights (in the US case, rights enshrined in their Constitution) and an understanding that while today it’s scary black rifles on the hit list,
tomorrow it could very easily be “anyone who disagrees with the Government”.

In this case, not only were pro-gun people marching against the laws, they were joined by organisations including Antifa and even the Black Panthers.

Picture that for a moment – three groups which are not usually considered to be on each other’s Christmas Card lists put aside their differences to come together on an issue that mattered.

Imagine if we could do that in Australia?

There’s also a more important message here about not being politically apathetic – that means when something that affects gun owners happens here, we need to do more than just whinge about in on Facebook or at the range.

The message is clear: Get active, get out there and be involved in the fight – and as Australia’s pre-eminent pro-shooting organisation, we’re here to help.

2020-01-24
sandra
Previous: Writing Guide for NT Reclassification
Next: Positive News from the NT