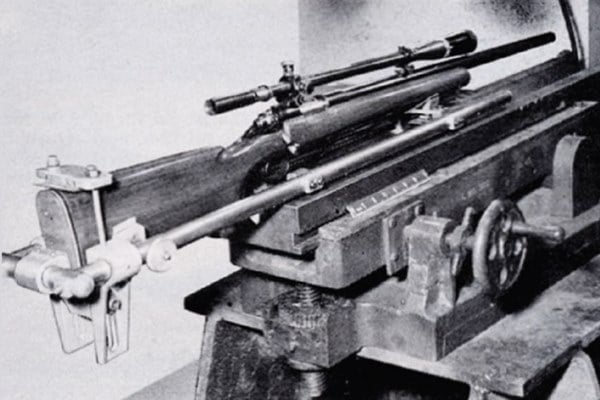 Have you ever wondered how often you should clean your rimfire rifle?

There are differing opinions about rimfire rifles, though most experts agree on how
often you should clean a centrefire. Match winning rimfire scores are produced by
individual shooters whose cleaning practices vary widely.

We recently came across an article about cleaning a rimfire rifle and how it can affect
accuracy. The article appeared in the NRA publication, American Rifleman, in June
1965 and was written by LF Moore. (We’ve republished it in full here). Although old, the article still has relevance
today. We gratefully acknowledge the author and the publication for this information.

According to the article, back in the 1930s, several brands of rimfire match
ammunition were loaded with a propellant which left a salt residue in the bore. That
propellant has long been abandoned and these days, rimfire ammunition propellants
thankfully don’t leave a rust-producing residue.

Extensive testing was carried out in the 1960s, when this article was written, on three
new rifles and one older one. All testing was done under conditions as nearly
uniform as possible on all four rifles tested. The older rifle had a history of about
50,000 rounds. A machine rest was used on a 100 yard enclosed range. A 20-
power scope was mounted on the rifle being tested.

At ambient temperature, five 10-round groups were fired without sighting or fouling
shots in each of the three new rifles. Immediately after firing the five 10-shot groups,
each of the barrels was cleaned while still in the rest. Cleaning was done with a
bronze brush, followed by a solvent cloth patch and then two dry patches. Another
five 10-shot groups were then fired, again without foulers. The tests on these new
rifles were done daily on four days in total. The 50,000 round used rifle also fired
five 10-shots groups on each day, but it was not cleaned at all during the test.
Then came the high temperature tests, which were a repeat of the previous ambient
temperature tests. The barrels were heated by six 250-watt infrared industrial
reflector lamps positioned about 12″ from the barrels for an hour before each test.

The temperature was sufficiently high to affect the definition of the scope, apparently
by condensation of moisture on the lenses. The temperature, on measurement,
varied between 135°F and 180°F at different points on the barrel and at different
times during the firing.

After finishing the high-temperature test, the lamps were turned off and the rifles
were permitted to cool. Each rifle then fired five 10-shot groups. The group sizes
obtained after the rifles cooled were the same as that obtained in the ambient-
temperature test.

The first shot fired from a rifle which had not been fired for some time was generally
out of the normal group and on several occasions the second shot was also out of
the group. Excluding the first group, there was no significant difference in the size of
the groups before and after cleaning, although there was a day-to-day variation, not
connected with cleaning.

There was definite fouling in the barrels, but there was no effect of that fouling seen
during these tests. The article said that fouling is normally too small to be seen
without magnification, but it builds up gradually and can be difficult to remove though
a bronze brush usually does the trick. There would of course, be some barrels with
characteristics that would cause fairly heavy fouling (eg a rough barrel), but that
would be uncommon on match rifles.

The article recommends a visual inspection of the barrel periodically after pushing
through a patch to remove the loose residue that results from firing a round.

Author of the article, LF Moore recommends only cleaning a rimfire rifle infrequently,
except when the rifle has been exposed to adverse weather. My own rimfire match
rifles using good quality target velocity ammunition, are cleaned when they go “off”
which is to say when I get shots that are inconsistent. That’s probably no more often
than every 1000 rounds. A good rifle will not be adversely affected by a good clean
now and then but regular cleaning doesn’t appear to be necessary.