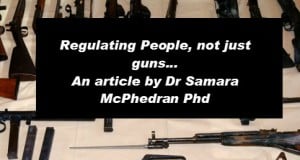 We are continually subjected to inflated newspaper claims that Howard’s ill-considered gun registration has done so much to reduce gun crime that we forget the other aspects to the 1996 gun laws, such as formalised gun safety courses which are a prerequisite to getting a gun licence, the police checks and built in restrictions on violent offenders obtaining a registered firearm.Dr. Samara McPhedran PhD, in one of her meticulously researched papers considers which part of the gun laws has had the most positive impact, the laws affecting guns, or the laws affecting people.

END_OF_DOCUMENT_TOKEN_TO_BE_REPLACED

The Folly of Gun Registration – Part 1

Derek Bernard wrote what follows after considering the huge costs and inconveniences of gun-registration systems when used as a form of gun control, as well as the total absence of any corresponding evidence of social benefits resulting from the systems – for example, in reducing gun crime, improving crime resolution, or identifying and convicting criminals.

END_OF_DOCUMENT_TOKEN_TO_BE_REPLACED

The Folly of Gun Registration – Part 2

In 1920 Jersey substantially copied the UK firearm act of the same year, including the procedure of registering all rifles and pistols, without either jurisdiction carrying out any meaningful research of any sort into the likely costs and effects of the procedure. We then rolled the clock forward 75 years to 1995 and a Jersey government proposal to expand the system to include shotguns, once [...]

END_OF_DOCUMENT_TOKEN_TO_BE_REPLACED

This is Gun Control Legislation gone mad. How would you feel when approved gun control legislation for firearm owners in Western Australia, can be declared null and void simply by the whim and opinion of one person? Welcome to WAPOL. NIOA TV has released a special episode highlighting the ridiculous gun control legislation that allows the Police Commissioner or any ...

END_OF_DOCUMENT_TOKEN_TO_BE_REPLACED

We have had enough: Australia NEEDS Harsher Penalties for Gun Theft The anti-gun lobbies are continually claiming that most gun crime is committed using guns stolen from legal firearm owners and they are using these exaggerated claims to support their case for tighter gun controls and bans. Shooters Union of Queensland has decided to put this issue back in the ...

END_OF_DOCUMENT_TOKEN_TO_BE_REPLACED

The federal government has recently announced a Senate inquiry into “The ability of Australian law enforcement authorities to eliminate gun-related violence in the community” We consider this to potentially be the worst threat to firearm owners since the Howard government gun-grab. One of the terms of reference identifies “The effect banning semi-automatic handguns would have on the number of illegally ...