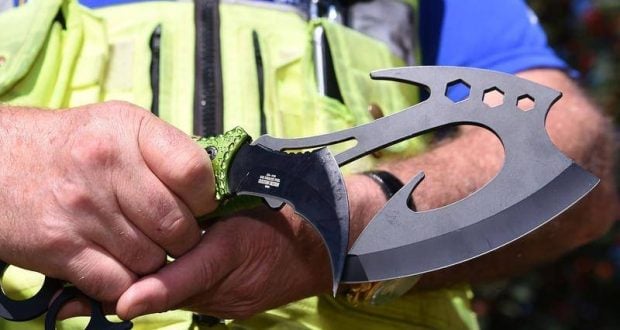 NSW is banning zombie knives and owners have an amnesty till month's end to hand them to police. (photo source: Illawarra Mercury)

WE always thought Western Australia was Australia’s ‘Stupid weapons laws’ capital, but New South Wales is rapidly giving them a run for their money.
NSW Police Minister Troy Grant has announced the state is banning so-called “Zombie Knives” at the end of this month, putting them
on the Prohibited Weapons schedule and requiring owners to hand them in or potentially spend 14 years as a guest of Her Majesty in one of the state’s increasingly overcrowded correctional facilities.

What exactly is a Zombie Knife, though? Various news reports (quoting a press release we have been unable to verify at time of writing) say “Zombie knives have multi-edged blades, with images, words or markings on them suggesting they are intended to be used for violence.”

This is so clearly subjective that it can only be described as “Appearance laws for knives”, which are so ridiculous it defies logic. Shooters Union Australia president Graham Park said the new laws were completely crazy.

“We now face the seemingly unbelievable situation of having our knife drawer inspected to make sure there are no ‘deadly-looking’ knives lurking within,” he said. “What planet do these politicians come from?”
There are also concerns that legitimate hunting and camping knives could be caught up in this ban, as many of them have multiple edges (including saw blades) and ‘look scary’ to the average Greens voter or Facebook Mums’ Group member.

What about if it has a fluoro green grip and Zombie-related words on it, but it only has a single edge?

NSW already has “appearance laws” for firearms – because a bolt action rifle that looks a bit like a self-loading military rifle if you squint at it is apparently more dangerous than a rifle that works the same but looks like a conventional hunting rifle, apparently.

Sensible people – which apparently doesn’t include the NSW Government – know a knife is just as capable of stabbing someone regardless of whether it’s a chef’s knife or has a fluoro green grip and the words “ZOMBIE HUNTER” on it somewhere.

We would also love to see some properly sourced and reliable statistics for Mr Grant’s claims that “there’s also a huge risk of accidents by those using them (Zombie Knives) as props or toys”, as we must have missed all the news stories and social media reports about interesting- looking knives suddenly leaping off display racks to stab passers-by, or injuring Cosplayers or causing casualties while performing plays or making video content.

We cannot help but wonder if this move is part of a “Strong on Law & Order” performance by the Berejiklian Government ahead of next month’s NSW State Election – an election in which a number of seats are under serious threat from the Shooters, Fishers and Farmers Party as well as
One Nation and various Independent candidates.