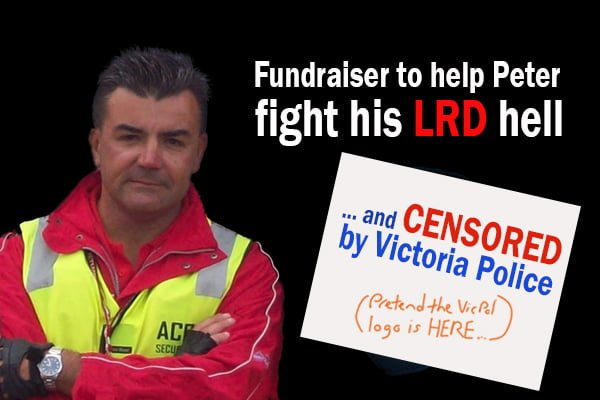 He served our country and did nothing wrong.

Then Victoria Police laid 8 firearm and weapon charges on him, all of which were beaten because they proved to be unfounded.

Now the red-faced regulator is trying to drive him out of business -and silence anyone wanting to help him.

This is a story about an abuse of power, a culture that ignores accountability and the need for Victoria’s public service watchdog to start asking some hard questions.

Let’s help Peter get his life back – and bring our rogue regulator back into line.
Peter (Zelko) Zabrdac is a former Australian Army soldier and leading figure in the Victorian security industry.

Over the years, Peter has advocated for the industry and shooters with some effect.  In more recent times he assisted one female security worker who received unsolicited and explicit pictures and text messages from a senior figure from Victoria Police’s Licensing & Regulation Division (LRD – the regulator for firearms and the security industry).  His efforts resulted in this story appearing about the LRD in The Age (click here to see the story) – and the officer’s resignation.

If you read further down in the article, you will see that Home Affairs Minister, Peter Dutton, has written to IBAC, Victoria’s Police Minister and the AFP requesting they investigate elements of the LRD’ s conduct – and the role Peter played in this.

Peter’s efforts did not please the LRD which has set out to make his life as difficult as possible.  In January 2017, Victoria Police officers working in conjunction with the LRD raided Peter’s house, as part of “Operation Baffler”.

While Victoria Police have denied this, Operation Baffler was aimed at the security industry and appears to be ongoing.

VicPol refuses to right a wrong

As a result of the raid, Peter was charged with 8 offences relating to failure to secure ammo and restricted weapons properly.   Peter went to trial in December.  The informing LRD officer did not want to front up to court, and had to be ordered to appear by the Judge.

Of the 8 charges, 6 were withdrawn and the remaining 2 struck out by the magistrate on just the second day.  VicPol/ LRD lost on all 8 counts and was clearly embarrassed.

Peter then asked LRD to return his licence.  However the LRD is refusing to do so on the basis he is not a “fit and proper person” to hold them, and that doing so was “not in the interest of the public”.

Peter’s problem is that this is his livelihood.  His only recourse is through legal channels – starting at VCAT (his appeal was lodged on December 28th).

So, we’re helping Peter with this fundraising campaign, to help him get justice.

The effect this is having on Peter

The LRD knows that the decisions it makes can drive people out of business.  If they had done something wrong, then maybe that’s a good thing.

However it is a power which can also be abused, as we are seeing here.  It certainly should not be an objective of a regulator to drive anyone out of business – especially where Peter hasn’t done anything wrong.   As a result of this, Peter is facing severe financial hardship and pressure from not being able to work.

The significance of a win

The LRD is the regulator entrusted by Parliament to do a job; one which will sometimes be a difficult one to perform.  However, we know from your numerous stories and complaints about the LRD that it is conducting itself poorly.

If Peter can win this case, it will help demonstrate to our law makers why they need to have a closer look at whether Victoria Police is the right agency to engage with the security and firearms industries given the conflict of interest it has by also being an investigative body (refer OECD Best Practice Principles on the Governance of Regulators).

In January, Victoria Police tried to shut this effort to help Peter down, with a letter to another shooting organisation from the Victorian Government Solicitor.

The problem?  The VGS claim that the Victoria Police logo used in the original version of the image to this story is trademarked, and that any unauthorised use of the logo is contrary to the Trade Marks Act.  We think that’s wrong, because trademarks are for goods and services, with which we do not compete.  Further, the Copyright Act authorises the use of copyrighted material where it is used for criticism or review.

We’ve removed it because we intend to have bit of fun with the claim later on.  However, it goes to show just how desperate Victoria Police are to sink Peter – and why we need to help him bring this rogue regulator to account.

This campaign has been set up to help Peter fight back.  Every donation received will go to helping Peter cover his legal costs, and hopefully explore what, if any, grounds he might have to seek damages.

To donate to Peter’s fight, just go to PayPal.Me/FightLRDinjustice

Later on, we’ll ask the Victorian Public Sector Commissioner to consider if Victoria Police are adhering the values expected of all public sector agencies – but not just yet.  Our priority is to help Peter.