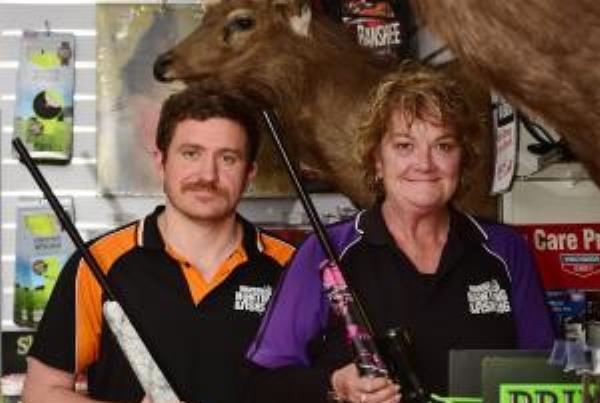 LUKE Davis was taught his way around a rifle not long after he took his first step.

“I’ve been following my dad around since I could walk, and have been going out by myself since I turned 18 and got my licence,” Mr Davis says.

He is from a family of “mad-keen” hunters who moved from Tasmania to Casterton in South West Victoria for greater access to the state’s “ideal” hunting terrain about 10 years ago.

More recently Mr Davis moved to Mansfield, one of Victoria’s hottest hunting destinations according to figures from a 2013 Department of Environment and Primary Industries report that looked at the economic impact of hunting in the state.

It found the sport accounted for 2.5 per cent of the shire’s economy, about $14.6 million, with sambar deer hunting the region’s main drawcard for recreational shooters.

Mr Davis is a meat manager at the town’s FoodWorks supermarket.

But in his spare time he recently started taking tourists on guided hunting tours. He says he started Alpine Adventures in a bid to capture a slice of the tourism dollar that flows into the town most weekends.

“During hound season, about $15,000 (worth of) meat goes out on a Friday and Saturday, blokes are standing there with orange hunting hats … on a Friday afternoon it’s ridiculous the amount of people who come into town, about 200 hound utes would come through, $1800 worth of diesel would be sold, then they go and buy $100 worth of food, then their alcohol, it all just adds up,” he says. “It’s the ripple effect, the way hunting brings money into the town.”

The 26-year-old has spent “thousands” on hunting gear, about 95 per cent of his friends hunt and fish and the traditionally masculine pursuit is not only popular among the lads, he says. “My sister, she’s just turned 18 and she’s taken deer of her own,” adding the pair mostly hunt with their dad.

For a town that has operated in the shadow of Mt Buller since snow sports took off not long after World War II, hunting appears to be making its popularity felt.

Twelve years ago the Kirley family opened the town’s first dedicated store, Mansfield Hunting and Fishing. Shane and Mandy’s son Nick was shooting competitively — he represented Australia at the Commonwealth Games in India in 2010 — “and we saw this gap in the market,” Shane says. “And it’s (hunting) just becoming bigger and bigger every year.”

And if the proof is in the proverbial pudding, what further evidence is required than the imminent opening of a second taxidermist in Mansfield, with Alpine Artistry set to open its door in a week.

But despite the growth of the sport at the foothills of the Victorian alps, Mansfield Shire’s tourism and economic development team leader, Judy Dixon, says it is not actively marketed so as to avoid deterring “mainstream” visitors who come to snow or water ski, fish, hike, horse ride or cycle.

“The economic benefit of hunting is important as a niche market,” Ms Dixon clarifies. She stresses the shire did however acknowledge and value hunting’s benefits to the town’s economy.

It is a stark contrast to the approach taken by nearby Towong Shire, north of Falls Creek, which is keen to embrace the hobby. It is believed to be the first Victorian council to formulate a dedicated hunting tourism action plan.

Mayor David Wortmann says the council threw its support behind the draft plan in August in a bid to capitalise on the shire’s “expansive natural assets” and pursue tourism that had the potential to bring new jobs into the region.

“As a small rural shire, any idea that could create jobs and money would be investigated,” Cr Wortmann says. “This one has come from the community: the deer population has escalated, they thought there was an opportunity there, and we believe Towong might have some of the best sambar hunting in Victoria, maybe even Australia.”

There are more than 50,000 licensed game hunters in Victoria, an increase of about 8000 in the past five years, and a 186 per cent increase in the past decade, the draft plan says.

The shire’s plan will look at ways to improve hunters’ access to private land for a fee, investigate celebrating the opening of the annual hunting season with a festival and, if game meat processing legislation changes, take the lead in developing this service, among other ideas.

Australian Deer Association chief executive Barry Howlett commends Towong’s initiative, particularly its ideas around the processing of wild-shot deer due to the limitations of the current regulations.

“I have a cool room and a small mincer, and most deer hunters have something set up at their house, but that’s severely limited,” Mr Howlett says.

He says if DEPI’s report released four years ago on the value of hunting in Victoria was repeated today, “it would undoubtedly show a much higher benefit to the state”.

“Hunting is going from strength to strength in Victoria,” he says.

Mr Davis agrees, and dreams of turning his passion into a career. “As long as the freedom of hunting is secured by the government, it will grow as a sport. And maybe in 20 years I’ll be able to turn Alpine Adventures into a full-time thing,” he says.