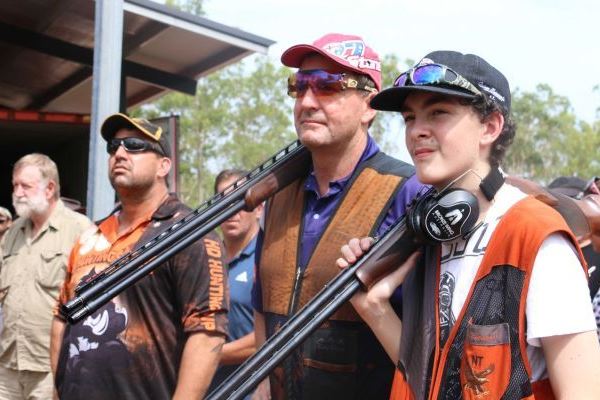 Northern Territory magpie goose hunters have rallied at a Darwin firing range to protest against reduced bag limits and a shorter season, a decision they say is taking an unfair aim at hunters.

NT Field and Game spokesman Bart Irwin told the crowd hunting was not the problem and the science behind the decision should be questioned.

“The Government continues to say that the population is on the decline,” Mr Irwin said.

“In actual fact, the magpie geese have just dispersed, across to Queensland, Western Australia, down into New South Wales and even as far as Victoria.

“They don’t all belong to the Territory. They’re Australia’s geese and they’ll go where they want, when they want.”

Geese down by almost half, Government says

The NT Government this year reduced magpie goose bag limits and the length of the 2017 hunting season after an NT Environment Department aerial survey revealed a significant decline in numbers.

The season begins on October 27 and lasts for eight weeks — a month shorter than last year’s season — and the daily bag limit for magpie geese has been reduced from seven to three.

The Environment Department’s survey found a 45 per cent decrease from 2016 to about 725,000 magpie geese, which the department said was part of a downward trend since 2014.

Magpie goose numbers have struggled to recover from consecutive “poor” wet seasons, according to the department’s report.

But Mr Irwin said he was present during the aerial survey and he did not understand the result.

“I saw three times as many geese as I saw in the same survey last year — how the figures have turned out like this, I don’t know what formula they’re applying,” he said.

“The Government and the Department have said themselves that hunting did not cause this, yet hunters are being used as the only means for it to recover.

“The Government and the Department they don’t care about geese like we do.

“We’re the only people who, when we see a goose we really look at it and say thank God it’s there, because we want to hunt it one day.”

Recreational magpie goose hunter David Barnes said he would not bother going out this season for three geese a day.

“If you could just go out each year and get your five a day. I think everybody would be happy with that.”

“Personally, I probably won’t go out this year. I’m not going out for three.”

‘Focus should be on restoring habitat’

According to Mr Irwin, if there is a problem with magpie goose numbers, the focus should be on restoring habitat for the geese.

“Habitat is what the birds rely on, if the swamps and the breeding areas are weed free they will have room to breed and food to eat,” he said.

Hunter Karen Glazbrook said her 12-year-old daughter Erica had been given her first rifle this year and would be hunting with the family.

“It’s a great family event with the kids. We go out on a Friday night, have dinner in the bushland.