Home - TRENDING ON SHOOTERS UNION: REGIONAL ISSUES - A must see for shooters 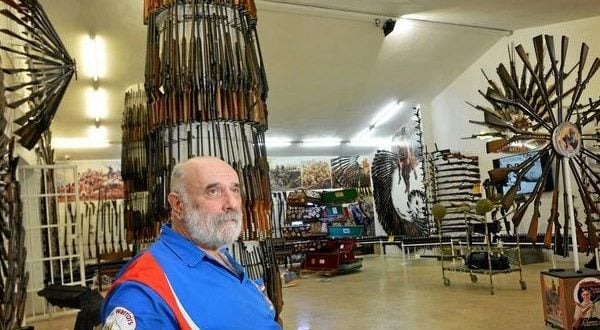 A must see for shooters

Any shooter who is between meaningful relationships and with nothing better to do is well advised to travel to Gympie to be gob smacked by Ron’s new Owen Guns museum which is the largest gun museum in the southern hemisphere. If you’re passing through the town, don’t miss it.

You walk through his shop, which is always full of good stuff, into a large concrete vault packed with displays which ram home our gun heritage. From priceless cased shotguns for the gentry, air rifles, .22 rabbit killers, hunting rifles, to the huge range of military hardware which has been part of our history, keeping the peace, protecting the Empire and which, as recently as the 1940’s, saved us from invasion and worse.

As The Gympie Times put it, “The amazing collection, going back three centuries, includes well over $1 million worth of historic tools and weaponry, but Mr Owen says there is a lot more to it than that. “This museum is not dedicated to the steel and wood artefacts, it is dedicated to our forefathers, who invented, designed, manufactured and used them,” he said on Friday.”They were the ones who found a wilderness and built our harbours and bridges, created tracks that turned into roads and railways across deserts and snow capped mountains,” he said.

And they fought in wars from the 19th Century onwards.

“Many of the firearms on these walls were part of the deterrent to an impending Japanese invasion,” he said.

The pioneers needed guns to help them survive, killing pests and shooting a meal.

The soldiers needed them for even more urgent survival requirements.

You may also have the chance to meet Ron himself, tireless campaigner for gun rights, a true battler for shooters. Ron heads the Cooloola Range Association and has been fighting to have the Queensland Government come good on their promise of 25 years ago to replace the Gympie Range, which they put a railway through. When Ron sets his mind to something, be it his museum, his gun shop, shooters rights, a range complex at Gympie, — it will be done.

More photos of the museum are available here: https://www.facebook.com/pg/owengunstrustmuseum/photos/ & https://www.owenguns.com/opening-25th-march-2017-owen-guns-museum/

Owen Guns Museum is located on the Southern side of Gympie just off the Bruce Highway in MacMahon Road and is visible from the highway. The museum is open Weekdays 9 to 5 and Saturdays 9 to 4. Entry fee: a donation.

To read the local newspaper coverage of the opening of the Owen Guns Museum, please click here.

Previous: How to Sight-in a Rifle Scope
Next: Steve Dickson – One Nation MP with Shooters Union President Graham Park